The SBIG ST-7XME that I used for 8 years:

I happily used an ST-7XME camera from Feb 2002 through May 2010.  I equipped it with a CFW-8 filter wheel so that I could do LRGB imaging.  I originally bought an "ST-7" camera then later upgraded it to an ST-7XME.  My "ST-7XME" camera contains two imaging chips, a 765x510 pixel black-and-white main imaging chip and an 192x164 pixel TC211 guide chip.  (SBIG's site currently shows the current version of the ST-7XME having a 657 x 495 pixel imaging chip of dimensions 4.9 x 3.7mm.  The imaging chip has shrunk over time apparently from the one in my version which is 765 x 510 pixels with dimensions 6.9 x 4.6 mm?)  Main advantage of the ST-7XME camera is that it is half the cost of the ST-4000XCM.  But by the time you also buy the filter wheel that is necessary, this advantage is diminished somewhat...

There were many times that I had difficulty locating a guide star on that tiny guide chip.  I use Megastar to show me the overlay boxes of the two chips against the star background and was often able to rotate the camera to get a good guide star within the guide chip's frame.  Rather tedious at times to actually get a decent guide star in the guide-frame...  Often cost me a lot of time.

To do LRGB imaging, you have to take images through each of the Red, Green, Blue, and Luminance (clear) filters.  The filters cover both the guide chip and the imaging chip.  So I might set up autoguiding on a blue star using the clear filter.  Everything would be fine until the filter changed to red.  Then the guide star would become much dimmer and I might lose tracking!  Very annoying.  If I could maintain tracking then I would take something like 10 images through the clear filter (luminance images), 10 through the red filter, 10 through the green filter, and 10 through the blue filter.  Then I would have to align and stack all the luminance images, align and stack all the red images, align and stack all the green images, and align and stack all the blue images.  That process would yield one luminance image, one red image, one green image and one blue image.  I would then combine those to yield a color image.   However, I often encountered problems in that the 4 filters might not have exactly the same thickness!   This causes some of the images to be out of focus due to Snell's law as seen here.  Focus is also affected as the temperature goes down at night.  Most telescopes shrink as they get colder.  Some actually lengthen (e.g., Takahashi TOA-130)  Overall, LRGB imaging is a tedious process often requiring re-shooting and reworking of images.  However, this process allows maximum flexibility and maximum quantum efficiency of the imaging chip

Considerations regarding purchase of a new camera:

1.  I have really liked having the guide chip in the same camera package as the imaging chip.

a.  You don't need a piggy-back guide scope
b.  You only need to focus one telescope
c.  No "differential flexure" problems where the two scopes don't stay aligned...
c.  So I was pretty sure I wanted to continue having a camera with the guide-chip built-in.

2.  I really wanted a larger guide chip though to simplify finding a guide star.
3.  I wanted a larger imaging chip.  The little 765 x 510 pixel, 6.9 x 4.6 mm imaging chip always felt VERY TINY compared to the 35 mm film I originally used for astrophotography.
4.  I was really worried that I would be giving up something important to me if I went to a "single-shot" CCD imaging chip instead of a black-and-white chip using filters.
5.  However all the reshooting, problems with losing the guide star, individual focusing required for various filters, etc., made me sometimes wish I could go back to film (Not really!  CCD has no reciprocity failure!  Effectively MUCH more sensitive than film!  No delay waiting for slides to return from processing labs!  Etc.!)
6.  Then I thought "Darn, I'm getting too old to spend so much time trying to acquire decent images."  I almost NEVER could get my stars to come out without color fringing due to different blooming star radii effects of the R G and B images.  Wasted LOTS of time on guide star acquisition, reshooting, and other LRGB post-processing.

So I researched the possible SBIG cameras with larger imaging surfaces and larger guide-chips built-in.

I finally concluded that the ST-4000XME seemed to be the right camera for me.

I purchased the camera from Astronomics.com which is where I have bought everything over the years.  They said it was back-ordered but it showed up at my door in less than 2 weeks!  Have always had great service from Astronomics.

So it is like having your color filters permanently in place.  That is why these types of chips cannot equal the sensitivity (quantum efficiency) of pure black-and-white chips that do not have a permanent color mask layer.

There are sophisticated techniques for creating a full-color image from an image resulting from the masked matrix:
http://www.unc.edu/~rjean/demosaicing/demosaicing.pdf

The trade-off in quantum efficiency according to SBIG is shown here: 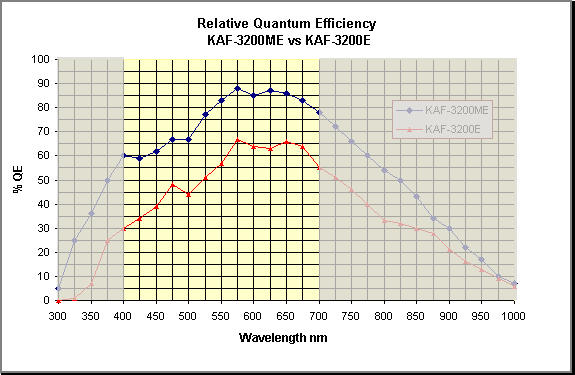 So apparently, the KAF-3200ME chip that does not have a bayer mask achieves about 86% Red , 80% Green and 67% Blue quantum efficiencies whereas the chip in the ST-4000XCM that is covered with the Bayer mask achieves only 39% Red, 42% Green, and  45% Blue quantum efficiencies.  So we are giving up some intrinsic sensitivity for non-filtered images.  About half the sensitivity.  For color images, the KAF-3200ME chip will have to be covered by Red, Green, and Blue filters respectively to get the color data.  The best filters now transmit nearly 100 percent of the Red, Green, or Blue data so the KAF-3200ME even filtered will continue to achieve sensitivity about twice that of the ST-4000XCM's chip.

So that means that my exposure times will need to be twice as long as they would be for someone using a KAF-3200 chip.  HOWEVER,a person using a KAF-3200 chip will have to take 4 images (L, R, G and B) for every 1 image (single shot full color) I take.  So, I'm thinking that "time is on my side."  It will take the KAF-3200 user twice as long to get all the frames needed to build an equivalent image - plus he has to do all the drudgery of registering, stacking, combining those images...  I just select "Convert Color" in Maxim DL to run the "demosaic" routine to produce a color image from my raw image.

In addition, the Bayer matrix filters (on the imaging chip) have the following characteristics: 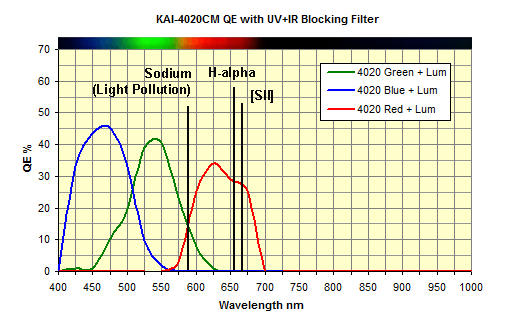 Note that the filters seem to be specifically designed to minimize reception of the Sodium lines, one of the major light-pollution sources.  This greatly aids in the ability to pull deep-sky images out of a light-polluted sky such as the one over my back yard...  Objects that I thought were impossible from my back yard are now relatively easily obtained.  (Of course one can do better in dark-sky country but the images I am getting in my back yard so far are as good or better than images I have previously obtained, using other cameras, from extremely dark-sky locations.)

One of the first images from my back yard using a 10" f/6.3 Meade scope was of M57.  After "Convert Color" I got the following image (cropped here to just include the object):

I thought "why is the outer rim of M57 green?  It is supposed to be red!

It was not until the next night when I had taken a pretty good image of the Trifid nebula that I figured out what was happening.  The main part of the Trifid nebula is supposed to be red.  My image, after applying "Convert Color" came out green!  Arrrrgh!  What was wrong?

So I used Maxim DL's "Split Tricolor" to create red, green and blue images.  Since I was familiar with what these three should look like, I realized that the red and green images had somehow been interchanged!  I could correct the problem by recombining and swapping the red and green images in the Combine Color function.  Seemed like a lot of extra work if I ALWAYS would have to do this.

Downloaded latest version of Maxim DL and installed it.  No change.  Red and green were still reversed.

Then I stumbled upon (it was 2:00 AM - stumbling time for me, a morning person) a rather obscure piece of documentation in Maxim DL regarding "Convert Color" that said:


"The X Offset and Y Offset selections are used to correct for any misalignment of the color mask in the CCD camera. Normally these are turned off. If the converted images exhibit an obvious color imbalance, try selecting different combinations of these two options."

What?  My chip might have a "misaligned color mask?"  New camera and they screwed up the chip?  Or is this normal chip manufacturing toss of the dice?  How could they misalign the mask?

However, when I set X offset to 1 the colors were now correct! 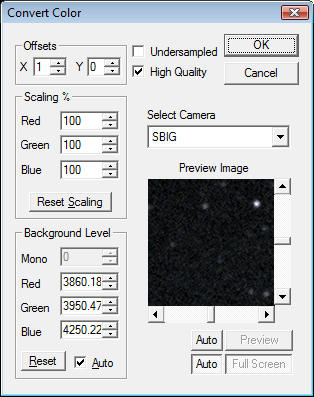 and resulted in the following:

Needed further processing but the colors were now correct!

After that, then I reran Convert Color on my Trifid (M20) image and, after additional processing, obtained this from my heavily light polluted back yard: 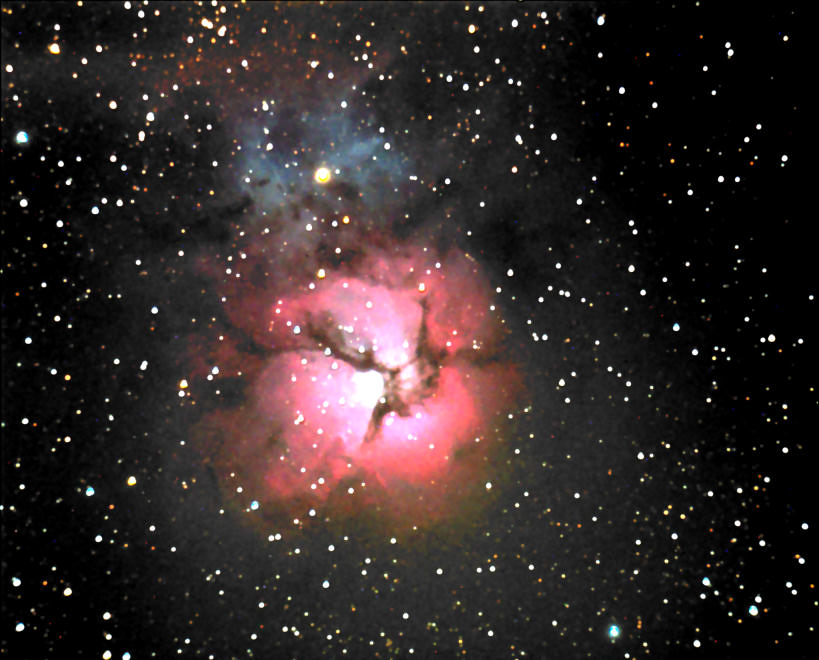 Best image I've ever taken of this object.  Better than when I have been out in really dark-sky country!

Can't wait to get out to dark-sky country to see how much better my images will be!

However, it is great to be able to do some of this from home!